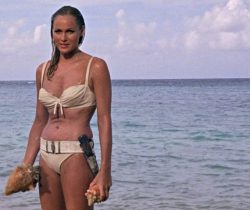 Wednesday 5th July is recognised as World Bikini Day! The origins of the modern bikini as we know it can be attributed to French engineer, Louis Reard. It has been suggested that the bikini was named after Bikini Atoll, where post war nuclear testing was taking place. Originally labelled as quite risqué, the bikini has matured to become a symbol of female individuality and expression. Over the years there have been some memorable moments in time where the bikini took centre stage. Who could forget such scenes as Ursula Andress, the Bond beauty in Dr No emerging from the surf? Or the deer skin bikini that Raquel Welsh wore in One Million Years B.C. Not to be outdone, Borat (Sacha Baron Cohen) introduced us to the Mankini in 2006. Maybe that one should remain in the history books! So what is the idea behind World Bikini Day? Well, it’s mainly to promote the idea of getting out and about and enjoying some of that beautiful sunshine. A little unlucky for us in the Southern Hemisphere, I think we should be campaigning for a split. In order for us to really enjoy and get the most out of World Bikini Day, we should have two days, one for the Northern and one for the Southern Hemisphere. Sometimes though when life gives you lemons, you make lemonade! So here at Any Boat, we like to take a positive spin on things. So although we may be in the middle of winter there are still some great options to consider if you want to celebrate World Bikini Day. Prometheus, a glamorous Warren super yacht is a resident of Sydney Harbour and what better way to get out in the sun than on a yacht like this? Prometheus has some great winter deals on at the moment for you to take advantage of and get out in the sun for a few hours!